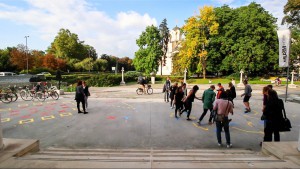 Friction Atlas is an ongoing critical archive, where laws regulating behaviours and gatherings in public spaces, sampled from different contexts, are represented and collected. Always implicitly present in any public space, law tends to be algorithmic, quantitative and invisible. Local and national regulations discretise human behaviour; sometimes they are rigorous and mathematical, other times loose and under-defined. Addressing the issue of legibility of public space, the project aims to make regulations explicit, through graphical devices. By drawing 1:1 diagrams, enacting laws on public surfaces, the project makes legal prescriptions and loopholes debatable. Through the engagement of the public, the dynamics of authority become also physically discernible. The diagrams represent cases from different cities, including Athens, Genoa, Cairo, Washington, Stockholm, Sydney, New York, and Rome. We invite the public to participate in a choreographed debate, in a rereading of urban space, which will highlight some of its hidden aspects.

Friction Atlas is a project by La Jetée (Paolo Patelli, Giuditta Vendrame). Initiated within BIO 50, the 24th Biennial of Design in Ljubljana, Slovenia, it is currently part of the ongoing Adhocracy Athens exhibition and programme.